Polly Iyer
Today is launch day for my Kindle Scout winner, Indiscretion. This isn’t my first book, but after my debut novel, written under a pen name, this is probably the biggest deal for me. To win a Kindle Press contract, which includes a $1500 advance, I first had to be accepted into the program. Then, for the next thirty days, my book needed to remain “Hot and Trending,” as much as possible. I tweeted, posted on Facebook, and gave shout-outs to people on my writers' groups to nominate the book if they liked the multi-chapter sample. 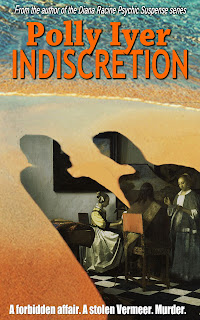 Those thirty days were very stressful, especially when my book went off the H &T list. I gave another push on social media and hoped my fate improved. Here are the thirty-day stats: 370 hours of Hot and Trending out of 720 hours. That’s a little better than 50%. 2,195 page views. That does not mean 2,195 nominations, just readers who looked at the sample. 51% came from the Kindle Scout site and 49% came from external links, mainly Facebook. Some came from my website, and others from this site, The Blood Red Pencil. Surprisingly, very few came from Twitter. I always wondered how many of my tweets were actually read, or do they just turn into retweets. There’s always been a bit of a “preaching-to-the-choir” element on Twitter, at least for writers. I know the couple of Facebook groups I belong to were very supportive, and most members nominated the book. Nominations cost nothing, and if the book was selected, the nominators would get a free copy two weeks before the book's release date. This is a good thing and a bad thing. Good because the nominations resulted in success for winning the contract. Bad because so many people got it for free that when it goes on sale today, many of my readers already have it. That means promoting it to readers who don’t know my work. Part of that goes to Amazon, as that's part of the lure of the program. You can't been the Zon for its marketing strength.

I don’t know what criteria the Kindle Press people use to make the final determination. I do know that people with more Hot and Trending hours than I had weren’t selected, and others with even less were chosen. I imagine part of their decision is based on a writer’s sales history and part on what the Kindle Press editors feel has potential to be a good seller.

After being selected, I got the edits. Mine were fantastic. The editor found a big plot hole that all my previous readers and critiquers didn’t catch. Obviously, neither did I. It required a rewrite of nine pages and became a better book. There were other edits, some a matter of style, others punctuation, some just nitpickers. I accepted those I agreed with and ignored the rest, which was my prerogative.

I always create characters with a complicated past or present. Characterization is important to me. Besides the crime fiction part, Indiscretion goes deeper and more seriously into a deteriorating marriage, so it becomes women’s fiction in parts. That’s a little different for me, and it was also challenging to depict that part of the story and still interweave it into the mystery.

So, as I mentioned, today, September 1st, is release day. As I give this piece my final perusal on August 31, I have already accumulated eight reviews from people who nominated the book — all excellent, so I’m happy about that. A couple of the reviewers claimed it’s my best book. I’m not a good judge of my work. It stands to reason I like the books I write, or I wouldn’t publish them.

The following is the blurb:

Separated from her controlling husband, romance author Zoe Swan meets a charismatic art history professor on the beach and begins a torrid affair. But who is he really? By the time Zoe finds out, she’s on the run with her husband, his jewel thief brother, and a priceless painting stolen from the Isabella Stewart Gardner Museum. With the FBI and the murderer in pursuit, the trio heads to Boston. The only way to prove their innocence is to make a deal with the very people who want them dead.

If this sounds interesting to you, you can download it on Amazon. Happy reading.