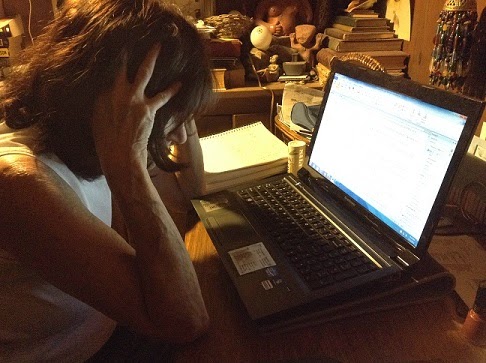 Expectations. Both mine and my readers.

Over the past year, people wrote to ask me when the next Diana Racine novel was coming out. OMG, people were waiting for it. Those readers had obviously liked the first two well enough to look forward to the third. I published the last one, Goddess of the Moon, in October of 2012. That was almost two years ago. I published one other standalone in between.

Though the first book, Mind Games, wasn’t published until March of 2012, I wrote it way back in 2003 or 2004. My agent spent a couple of years trying to sell it to a publisher, with no success. Then I got distracted writing a few erotic romances under a pen name, published by two very good e-publishers. With no large or small press interested in Mind Games, I decided to self-publish it and the other suspense books I’d already written. At the time, I had no intention of writing a series until I had an idea for a second book, and Goddess of the Moon was born.

Both books received pretty good reviews. How could I possibly live up to them with a third book? I didn’t want to rely on the same formula—I hate that word when it applies to books—that I used in the first two books, namely, Diana in trouble to be rescued by New Orleans police lieutenant, Ernie Lucier, the love of her life. Was there enough excitement? Suspense? Even humor?

One of the main criticisms in longtime series is keeping the characters from becoming stale and repetitious, thereby relying on contrived storylines to make up for the lack of characterization. Since Mind Games was written as a stand-alone, I had to dig deep to advance my main characters in Goddess of the Moon. What was left to know about them? How could I keep them fresh in the third book without losing the traits I had worked so hard to cultivate? Does the relationship between the two protagonists evolve naturally?

You see where I’m going? I began to second-guess myself, fearing Backlash wasn’t up to the two that preceded it. I agonized, edited, rewrote, and in the process lost my objectivity.

I always knew the ending, but getting there took every bit of perseverance I could muster. I’m reading it aloud now, patching inconsistencies, and will send it to a beta reader for her opinion and to my editor for her superb editing skills. My brilliant critique partner has already given it her stamp of approval, surprised by a twist at the end. I’ve announced a September publication date because I think on the whole it’s as good as I can make it.

But what a trip.

Writing a series, though popular with readers, adds extra pressure for me as a writer. Maybe I put that pressure on myself, but I’ve read so many second and third books of a series that can’t hold a candle to the first one. Don’t ask how I feel about the tenth or fifteenth book in a series. I admire those authors who can pull off a long series without disappointing his or her readers.

Will I write a fourth? I doubt it unless I have a major brainstorm, and the story is written in my head from beginning to end. Of course if the producers of the Jason Bourne series want to try another movie franchise…