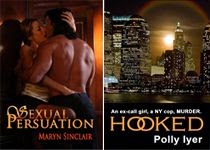 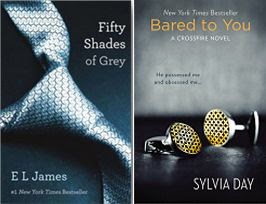 I chose the next batch of covers for variety so you can see how the publishers differentiate the genres. 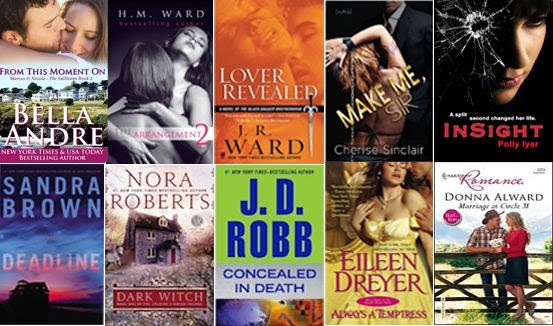 Self-published and bestselling Contemporary Romance author, Bella Andre’s covers are consistent: an embracing couple, heads and hands only, on the top third of the cover, then a combination of her name, book title, and scene vying for the remaining space. They spell out the genre nicely.
H.M. Ward, self–publishd, bestselling New Adult romance author, has published a slew of books in 2013, but in vignettes (to the wrath of some readers because of the cost); whereas, J.R. Ward, bestselling traditionally-published Paranormal Romance author’s series go back to 2005. H.M. Ward/J.R. Ward—hmm, I wonder. Both bookcover styles are basically monochromatic. H.M.’s are black and white with a hint of color on some. J.R.’s are either mono-colored or they depict strongly contrasted dark figures. All of these authors’ books are series, which seem to sell better than one-offs, and they have created a brand by their consistent covers.
Cherise Sinclair is a top author for erotic e-book publisher Loose-Id. Her theme is mostly BDSM, and her strong, dark, and defined covers leave no doubt of what you’re getting when you choose one of her books.
No post on romance authors would be complete without bestselling authors, Nora Roberts and  Sandra Brown. Both started out in Category Romance and have made the transition to Mainstream Romance and Romantic Suspense. Their covers have the backing of the big publishers, and as you can see, they know what they’re doing. Most of Nora’s mainstream books have a flowery look to them with fancier lettering. I added one cover from her J.D. Robb’s futuristic Death series to show how differently the publisher creates the genres. Every J.D. Robb book has the same design pattern—again consistency is the key. There’s no way to confuse the two personas of the bestselling and most prolific romance author of all time. Sandra Brown, one of my favorite Romantic Suspense authors, has strong yet simple covers. One scene, large type, her name almost always above the title. The atmosphere always says Suspense more than Romance.
I added a Harlequin Romance cover with a Western theme. When a reader orders a Harlequin book, she pretty much knows what she’s getting. Little or no sex, no bad language, and marriage at the end. Their covers are light and romantic.
One thing about covers: they need to hold up when reduced to a thumbnail. I see only one book of the fourteen I posted where the title isn’t clear, although the names on a couple of them, including mine, could be a larger.
Just remember, your cover is the introduction to your book. Making the right impression is the first step toward a reader’s purchase.