Maryannwrites
This poem first appeared here at The Blood Red Pencil in December 2009, but the very first publication was in 1980, when I was writing a weekly column for a suburban newspaper. Throughout the years I have dusted it off to share again with a new group of readers. Enjoy. 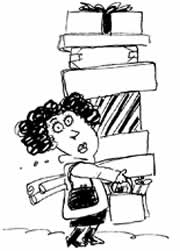 Tis the day before Christmas and all is not done,
Things on the “to do” list number a million and one.
There are cookies to cut while the oven is hot,
And a gift for Aunt Mildred. Egad! I forgot.
There are presents to measure, to balance and wrap,
If the stacks are not even the kids will know in a snap.
The turkey is snug in the freezer so cold,
Will anyone notice if I put dinner on hold?
Tis the day to test stamina, courage, and brawn,
The survivors are heroes at next morning’s dawn.
Just when I thought I was running out of time
A stranger appeared with a smile so sublime.
He was dressed all in silver from his head to his toe.
And I blinked my eyes twice to see if he would go.
He patted my shoulder and gave me a latte,
“Your’re almost there,” he said. “The rest will be easy.
“Don’t worry, don’t fret, don’t get in a frazzle,
Together we’ll do it with narry a hassle.
I’ll hang the tinsel and check all the lights,
You bathe the children and kiss them goodnight.”
The kids were all tucked in their beds nice and warm.
(A threat to their presents always works like a charm.)
I’d finally decided, of course. It’s a dream.
That’s a mirage on my sofa eating toffee ice cream.
I was amazed at the picture that greeted my eyes,
My living room looked like Currier and Ives.
The stockings were stuffed, and so was the bird,
What magic he used was beyond any word.
He smacked his lips, gave a sly little wink,
“It’s time I was off to help others, I think.”
He twirled around once, then three times and more,
And in a twinkling was headed out my front door.
There’s no doubt about it; it was love at first sight,
For that stranger who saved me on Christmas Eve night.
No matter his name, he was really such a dear.
I wonder, will he return again in another year?
Merry Christmas to all, and to all, Good Cheer!
~~~~~~~~~~~